This document identifies recipes written by Lady Grisell Baillie, Lady Murray, Janet Kirk, and May Menzies beginning on page 175 of the manuscript cookbook “Scots Cookbook Partly in the Hand of Lady Grisell Baillie” (W. a 111 in the Folger Shakespeare Library). The handwriting of Lady Grisell, Lady Murray, and May Menzies can be identified from letters and other writings at Mellerstain. Janet Kirk identifies herself with signatures in several places in the cookbook.

This document also reveals the identities of persons to whom recipes in this section of the manuscript are ascribed. The names of these persons are written below in italics, together with any additional information if available. 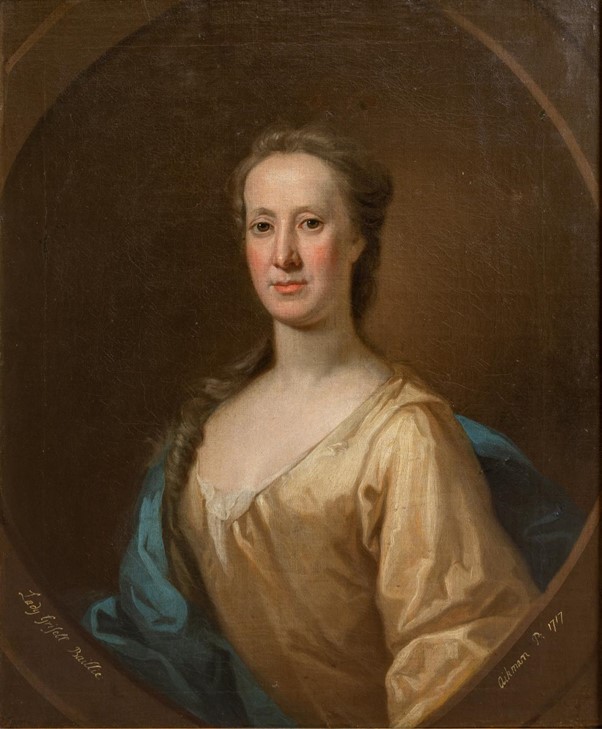 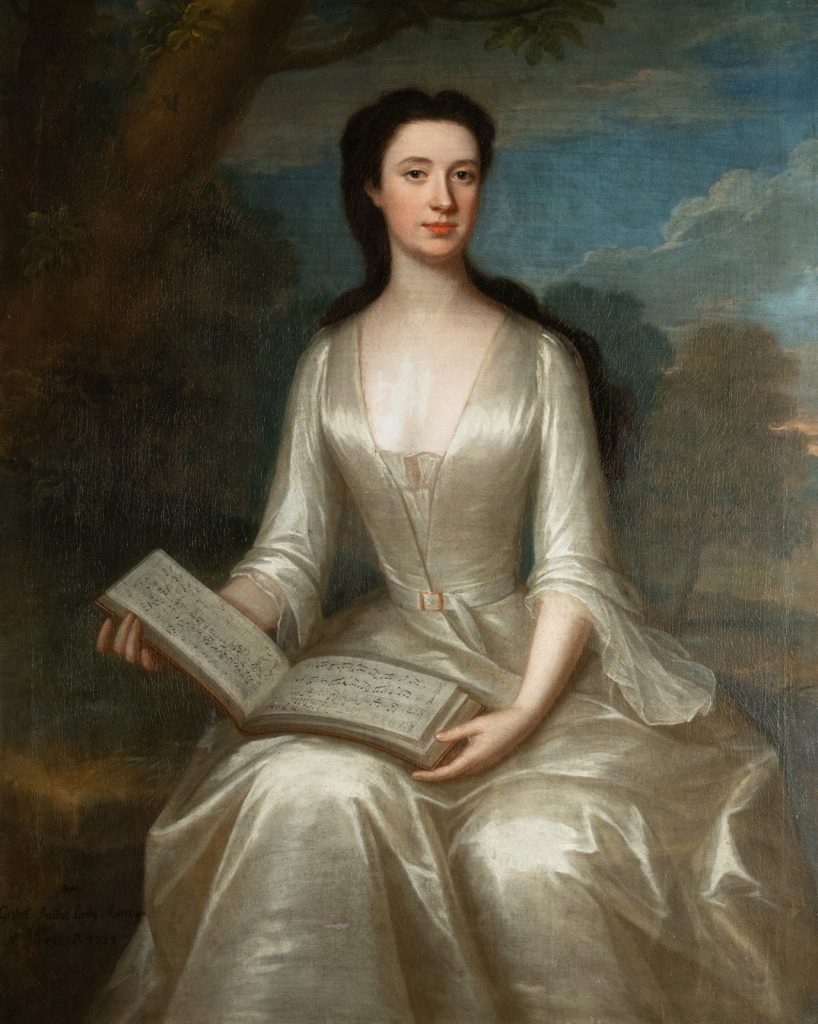 Portrait at Mellerstain of Grisell, Lady Murray 1725 by Maria Verelst (Photo credit Ray Bird of Rare Bird Media) Lady Grisell’s elder daughter Grisell, Lady Murray lived in her mother’s household consistently except for very short periods between 1711 and 1714 when a legal separation was arranged between herself and her husband Alexander Murray of Stanhope, whom she had married in 1711 at the age of 17.

Patrick Steel kept the Cross Keys Tavern in the High Street in Edinburgh during the period George Baillie and Lady Grisell lived there. He was a violinist and violin maker, and held concerts in the tavern. He built a tenement adjoining Wariston’s land, where the Baillies lived.

Dr. Trotter, a doctor of medicine who was living in the High Street in Edinburgh in 1700, before moving to Duns on his marriage to Julian Home, sister of George Home of Kimmerghame, diarist and relative of Lady Grisell.

A man named only as Porterfield was engaged by Lady Grisell in Edinburgh in 1701 to teach her daughter Rachy (Rachel) to read, as shown in Lady Grisell’s account book.

Probably John Cockburn (1679-1758) Scottish politician and landowner, fellow member with George Baillie of the Squadrone Volante who worked towards securing the Union of Scotland with England.

Page 207 Writer not identified, but with title inserted by Lady Grisell.

Pages 209 (bottom) to 226 (top) appear to be in the handwriting of Janet Kirk (see pages 423ff) but without any of her characteristic signatures, initials or ‘doodles’.

Page 222 ‘Ma [possibly Mary or Margaret] Sallerfield [not identified] is written beside the recipe for ‘A rump of beef’, and the following recipe that the writer has been asked to copy into the book and which concerns scouring of dishes [possibly pewter?] is headed ‘Memorandum from Mary McIntosh’.

Lady Grisell says of Mary McIntosh, “Mary McIntosh came to my service as cook At Whitsunday [May] 1703 her fie in the year is £36:0:0 [pounds Scots]”. Mary McIntosh received £54 in total, so must have remained for a year and a half, to November 1704.

Lady Elizabeth Maitland, daughter of John, 5th Earl of Lauderdale, and wife of James Carmichael, 2nd Earl of Hyndford, whom she married in 1710.

Page 261 Writer unidentified, with inserted note from Lady Grisell. It is also noted that ‘the following 8 receipts are from Mrs Johnston’, (to page 266) probably meaning Lucy Claxton, 3rd wife of James Johnston, rather than the writer of pages 3-175.

Not identified, but may be Mrs Cleland, Lucy DuPass (d. 1763), wife of William Cleland (1673-1741)  who lived in St. James’ Place. Cleland was a friend of Alexander Pope, who was also in Lady Grisell’s circle of acquaintance.

Page 286 (lower half) Lady Grisell’s recipe for punch; she notes the source as ‘my self’.

The Duchess of Roxburghe (288)

Grizel Cochrane (1666-1748), daughter of Sir John Cochrane, wife of John Ker of Moriston. Grizel Cochrane is famed for an armed robbery in 1685 on a post rider, to prevent her father’s death warrant reaching Edinburgh.

Page 292 Lady Grisell identifies the recipes as coming from ‘L For’ and ‘L F’.

Page 293 Lady Grisell’s writing. The second recipe is credited to ‘Mrs Graham’ (probably wife of Colonel Graham above) and dated 1720.

Page 302 (lower half) Lady Grisell’s writing until page 307. Here she is obviously copying from a manuscript as spaces have been left for two illegible words.

Page 405 Lady Grisell’s writing, with notes by Lady Murray, noting the recipe is from ‘Lord Sunderland’

Page 406 Lady Grisell’s writing, the recipe for Stilton cheese ‘got from a dairymaid there 1717’.

Page 408 Lady Murray’s writing. She notes that the first recipe is ‘from Mrs Tonyne’.

Jane, wife of Charles William Tonyn, a Colonel in the Enniskillen Dragoons who acted as factor to Lady Grisell’s father Sir Patrick Hume while he resided in Berwick-upon-Tweed in the years preceding his death. Jane, otherwise known as Jean/Jeannie, was Lady Grisell’s niece, the daughter of her sister Julian whose runaway marriage to Charles Bellingham had caused scandal in the family.

The second recipe on this page is ‘To make Earle of Marchmont’s juniper watter’, and most probably refers to Lady Murray’s grandfather. This recipe is dated by Lady Murray ‘Mellerstain Apr 10th 1735’.

Page 409 Second recipe in the same hand, with a note by Lady Murray, attributing it to ‘Do: Arbuthnot’

Doctor George Cheyne 1672-1743, Scottish physician and dietician working in Bath and London, and prescribing regularly for the Baillie family in the 1730s.

The second recipe is annotated by Lady Murray ‘Naples August 14th 1732’. (George Baillie, Lady Grisell, Lady Murray, Lady Binning, and Grisie Hamilton, Lady Grisell’s granddaughter all travelled to Naples in 1731 in the hopes that the sunny climate would cure the tuberculosis of Lord Binning, Lady Grisell’s son-in-law, but in vain as he died there in December 1732).

Not known, but annotated by Lady Murray ‘a la Palais Royal’

May Menzies, daughter of William Menzies of Raw WS, engaged by Lady Grisell in 1705 as governess to her daughters Grisie [Lady Murray] and Rachy [Lady Binning]. Mrs Menzies remained with the family until her death in 1753. (The title ‘Mrs’, spoken as ‘Mistress’ in eighteenth century Scotland, was used to address all untitled adult women, and did not necessarily indicate they were married). In the account of May Menzies’ funeral expenses Lady Murray writes, ‘a most faithful and affectionate friend and servant for 48 years in our family’. May Menzies was buried in the family mausoleum at Mellerstain.

Page 417 Unidentified writer notes recipes from ‘Ld Baitman’ and ‘The Dutches of Norfolk’.

The second recipe on this page has a note from Lady Murray that it is from ‘Earl Hadinton’.

Page 419 Unidentified writer, with a note from Lady Murray that the cake recipe is from ‘Lady Alice Hume’.

Page 419 A note from Lady Murray that the second recipe is from ‘Mrs Duncomb’.

Page 420 A recipe for clearing wine ‘as it was done at Lord Marchmonts cellers at Cambray’.

This writer identifies herself in several places in the book with signatures ‘Ja: Kirk’ or initials ‘JK’ and adds flourishes and embellishments, including some curious cartoon-like drawings, to some recipes. While the first 175 pages of the book were filled sequentially by Catherine Poulett, it seems that once in Lady Grisell’s possession some pages were left blank and later pages written on perhaps in an attempt to group similar types of receipts together, as many of those that Janet Kirk has been asked to copy out in this group are remedies rather than culinary recipes.

In Lady Grisell’s account book, with the date January 1706 and ‘Mellerstain’ written in the margin (the family’s most frequent residence was in Edinburgh at this time) she notes, ‘For Arles and fieing Janit Kirk £1:1:0’ and in the list of servants’ wages, ‘Janit Kirk came to be cook Martinmas [11th November] 1706 her fie in the year is 30 [pounds Scots] Feb 26 to her £1:9:0 May 15 to her for half a year £13:11:0’. Sadly it is not possible to further identify Janet Kirk, and her name does not appear in any subsequent list of servants’ wages.

Lady Christian Carnegie (d. 1744) wife of James Graham 1st Duke of Montrose, whom she married in 1702. She did not become Duchess of Montrose until April 1707 when her husband was made a Duke, which ties in with Janet Kirk’s employment as cook in 1706/7.

Page 453 recipe which the Countess of Haddington got from Mrs Traill.

Page 467 ‘Doodles’ of a lion rampant and a flower. A note ‘Mrs Menzies’ in Lady Murray’s hand.

Pages 474-5 Note by Lady Murray at end of first recipe.

A friend who was significant in the Baillie family’s stay in Naples in 1731/2, and who continued to be sent gifts on their return home.

Page 476 ‘Lady Frances Ereskin Spa 1731’. (The Baillie family had a stay of several weeks in Spa, in modern-day Belgium, from 9th July to 15th September, on their journey to Naples).

Walter Harte (1709-74), poet, historian and tutor to Lady Grisell’s grandsons Thomas and George when they were studying at St Mary Hall, Oxford in the late 1730s.

Margaret Sherard, wife of the Most Reverend John Gilbert, who successively held the bishoprics of Llandaff, Salisbury and York. Mrs Gilbert and her husband were among those who visited Lady Grisell regularly during the last weeks of her life.

Precise identity unknown, but Dr. Ward attended Lady Grisell on December 5th 1746, the day before she died. His fee was one guinea.

Page 495 Three recipes in May Menzies’ writing, all ascribed to ‘Mrs Johnston’.

Longstanding friends of the Baillie family were David Mitchell (né Cook) and his wife Mary Burnet (1692-1788), daughter of Bishop Gilbert Burnet, a cousin of George Baillie. David Mitchell and Mary his wife had a daughter Mary, who must be the ‘Miss Mitchel’ referred to.

Elizabeth Scott, daughter of Sir Francis Scott of Mangerton who married before 1704 Colonel John Stewart, who had several estates including Hartrigge by Jedburgh. Colonel Stewart is mentioned by Lady Grisell in 1714 when arranging for her daughter’s separation from her husband Alexander Murray. Colonel Stewart was killed by Sir Gilbert Elliot of Stobs in 1726 in a drunken argument.

Pages 538-540 Janet Kirk- writing much cramped at bottom of 540 as the writer is running out of space, as if 541 were already written on.

Pages 541-582 An unidentified writer, no originators of recipes named.

Page 592 is blank, then follow an index and a supplementary index when space ran out in the first one. The hands of Lady Grisell, Lady Murray and Janet Kirk (with fleur de lys doodle) are all recognisable in the indices.

It is interesting to note that the names of a number of persons who contributed recipes also appear, some very frequently, in the list of visitors to Lady Grisell’s (London) house in November and December 1746, the last weeks of her life. These are: Lady Irwin, Mrs Cleland, Lord Bateman, Mrs Gilbert, Mrs Johnston, Mrs Stewart, the Duchess of Montrose and Lady Carlisle.