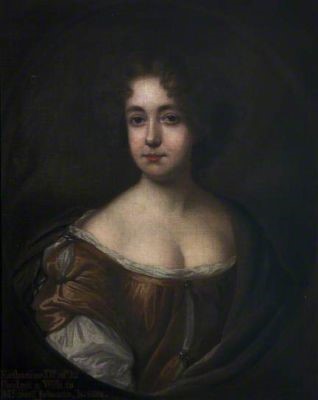 Lady Grisell’s mother-in-law Rachel Johnston was daughter of Archibald Johnston of Wariston. Rachel’s brother James became Secretary of State for Scotland in 1692, and George Baillie often accompanied his uncle to London on state business and stayed in lodgings with him there when not at his family home in Wariston’s Land in Edinburgh, also owned by James Johnston.

Given that the names in the first 175 pages belong to the Vere and Poulett families, I suggest that the identity of the first writer is Catharine Poulett, the second wife of James Johnston, and 1696, the year of her marriage, is a plausible date for the beginning of the book. Catharine Poulett also had Harcourt cousins as her mother’s aunt Frances de Vere had married a Robert Harcourt.

That’s a lot of complicated genealogy, but boils down to the fact that I think: The manuscript cookbook was begun c1696, and the first 175 pages written by Catharine Johnston née Poulett in ‘Orleans House’ at Twickenham near London.

Pages 1 and 2 of this manuscript are missing. Pages 3-175 are all apparently in the same hand. The writer has apparently copied recipes from a number of different recipe books from her acquaintance, and has access to a wide range of ingredients, some expensive and exotic. Some recipes are credited to their originator, viz:

The recipes appear to have been copied verbatim, possibly from both manuscript and printed sources. An occasional gap is left where a word in the original manuscript could not be deciphered. Although some of the recipes in the first 175 pages betray a Scots acquaintance, the writer, assumed to be a woman, appears herself to be English to judge by the names accompanying recipes in the earlier pages, several of which have familial connections to each other, and many of which are connected to the English court, House of Commons or House of Lords. (Scotland had its own parliament up to 1707). Many of the names appear in the (London) Westminster Rate Books for the 1690s, though not in the Hearth Tax Rolls for Edinburgh at the same period.

Some tentative identifications of named persons:

The writer is possibly related to Simon Harcourt (1653-1724) who was appointed Clerk of the Peace for the county of Middlesex in 1689 by the Earl of Clare, Lord Lieutenant of Middlesex, and was later MP for Aylesbury.

May be Henrietta de la Rochefoucauld, (d. 1732) the wife or dowager of William Wentworth 2nd Earl of Strafford who died in 1695.

Lady Margaret Cavendish 1661-1716 married John Holles 4th Earl of Clare (succeeded 1689) in 1690. She was only known as Lady Clare from 1690-94 as that was when her husband became Duke of Newcastle, after which date she became Duchess of Newcastle.

MP for Northampton. His second wife, whom he married in 1682, was Catherine, daughter of John Poulett, 3rd Baron Poulett of Hinton

May be Susan Herbert, daughter of Philip 5th Earl of Pembroke, and widow of John Poulett (c1641-79) MP for Somerset, whose mother was Catherine, daughter of Baron Vere of Tilbury.

Possibly Elizabeth Bennet, widow of Sir Robert Carr (1637-82), who was a cousin of Sir Edward Rossiter.

Maybe one of the three daughters of Aubrey Earl of Oxford who died in 1702. Lady Diana de Vere became Duchess of St Albans in 1694, but her sisters Mary and Henrietta (‘Harriet’) remained unmarried.

Other, mostly untitled, originators of recipes are not able to be identified and, despite identifying the above members of her acquaintance.

Half way down page 175, the writing changes abruptly to that of Lady Grisell Baillie (1665-1746). Although the bookplate pasted in the front of the book is dated 1724, George Baillie (1664-1738), husband of Lady Grisell only had this one bookplate printed. Many volumes of much earlier date in the Mellerstain library back through the seventeenth and even into the sixteenth century bear this same bookplate. (Confusingly, his grandson George (Hamilton) Baillie (1723-97) also continued to use his grandfather’s bookplate in much later publications).

A connection between the writer of the first 175 pages and Lady Grisell is the recipe on page 158 for ‘Carvell Cake’.  No name is mentioned beside the recipe, but in the index the writer has added ‘My Lady Julian’s way’. Lady Julian Hume was a younger sister of Lady Grisell who had scandalised the family with a runaway marriage in 1698 to a Charles Bellingham, a man with a criminal past and no fortune whose father, John Bellingham had been manager of the Duke of Buckingham’s glassworks at Vauxhall in London in the 1680s.