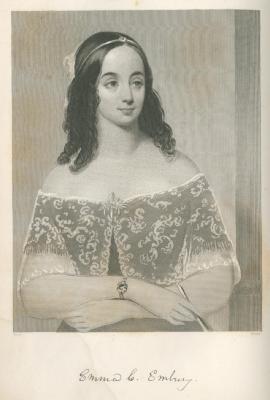 This book is divided into four parts: cakes, pastry, jellies, and miscellaneous. Cakes is by far the largest section, comprising over eighty recipes; pastry (by which Embury mostly means puddings, which were then considered part of the pastry family) is the second largest, with about fifty recipes. Jellies (that is, gelatin or isinglass jellies) is the smallest section, with only five recipes. The twenty-two miscellaneous recipes are miscellaneous indeed, comprising everything from barbecued fish, to pickled walnuts, to potato yeast, to preserves, to oyster sauce.

The cakes section is of particular interest. It includes many recipes of Dutch origin, such as Hard Waffles (iron-baked thin wafers), Soft Waffles (to be baked in a "soft waffle iron"), Puffort (a fruited tea bread), New Year's Cakes (also called "cookies"), Doughnuts, and many recipes for Kruellers (as she spells crullers). Several of her cake recipes include corrections and/or notes. For example, following her recipe for Kreullers, on page 69, she writes: "Memo: never to use this receipt again—best receipt Mrs. Manley's page 4." Following Mrs. Manley's receipt Embury has inked in, in parentheses, "best receipt." (To a modern eye, the two cruller recipes appear on the page to be quite similar to each other and similar, also, to the general run of cruller recipes outlined in print cookbooks. It would be instructive to try both.) In like fashion, Embury has written, following a recipe for doughnuts, "an improvement upon Mrs. Hart's receipt." As these examples suggest, many of Embury's cake recipes are attributed, which explains why, in her recipe for "Muffins, excellent," she has taken the time to add "my own." The "sweet cakes" in this cookbook tend to be fine and rich and the "warm cakes" (such things as muffins, waffles, and shortcakes) fancy, suggesting that Embury, a respected fiction writer and poet, served cake in the famous salon she hosted in her New York City home.