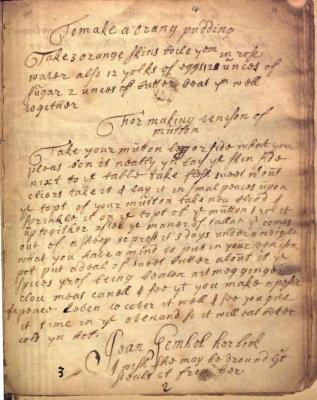 This 60-page manuscript, written in a single sometimes difficult hand, contains approximately ninety-one culinary recipes, in addition to a number of medical and household recipes, most of which appear in a clutch on pages 45 through 51. The manuscript could fairly be described as a book of receipts for banqueting, the fancy little meal of sweets fashionable in England in the sixteenth and seventeenth centuries. The book begins with approximately fifty-five recipes for fruit preserving and fruit confectionery, the principal articles of banqueting stuff. Fifteen additional recipes outline other conceits often served at banquets: quince tarts; puff paste; cakes, little cakes, and biskets; dessert creams (5 recipes); calf's foot jelly; slip-coat cheese; and posset. The manuscript also includes some recipes for dishes served in the principal courses of the meal: pickled mushrooms; eight savory pies and "baked meats" (large cuts of meat in pastry crusts); eight puddings (including two orange puddings, highly popular at the time); and two potted meats. There is also a recipe titled "For making venison of mũtton," an idiosyncratic version of a fashionable seventeenth-century dish that entailed roasting mutton in its blood.

The manuscript includes a curse on page 31:"Jean Gembel her book / I wish she may be drouned yt steals it from her."