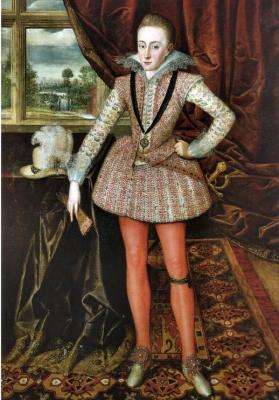 This receipt book of approximately 448 written pages, penned by a single individual in neat secretary hand, is associated with Henry Frederick, Prince of Wales (1594-1612), the first-born child of English King James I and his wife, Queen Anne. Henry Frederick is unlikely to have written this enormous book, as he died at age 18. However, he may possibly have commissioned it at some point following his investiture as Prince of Wales, in 1610, whereupon he strove to create an image of himself as an educated, cultured Renaissance prince. The book is mostly given over to the conceits of the banquet, a lavish spread of sweets that was sometimes served as the final course of a grand meal and sometimes staged as a stand-alone party. Banqueting was a perquisite of the elite in Henry Frederick's time, and a knowledge of banqueting stuff on the scale that the book suggests implied remarkable sophistication. The book, in short, may have been part of Henry Frederick's project to build his reputation as a worthy future king of England.

The first seven sections of the book are almost entirely given over to recipes for banqueting stuff. “Preserves” are mostly whole fruits put up in heavy sugar syrups; "Marmaledds” are fruit pastes, mostly of quince (the original marmalade stuff) but of other fruits as well; “Dryed fruites” comprise, in today’s terms, both candied fruits (of a sort) and fruits that are simply dried; “Quiddemocks” are stiff quince jellies; “Candyes” include sugar work and marzipan as well as candied flowers, roots, and fruits; and “Gellyes” comprise both fruit jellies and animal gelatins, which were served similarly. The “Serrops” section includes not only syrups, which were usually diluted with water to make drinks, but also wines and other drinks and vinegar.

The eighth and ninth sections ("Bakemeates" and "Cookery") contain a mix of banqueting recipes and recipes suitable to the principal courses of dinner.“Bakemeates” were typically defined in the period as pies, tarts, and other conceits involving pastry. Some recipes for such appear in this section, but most recipes concern banqueting stuff, including biskets (sweet biscuits), fruit pastes, and sugar work. “Cookery,” in the day, generally referred to dishes served in the principal courses of dinner, such as meat and fowl, fish, vegetables, pickled dishes, and puddings.  Some such dishes are included in the “Cookery” section, particularly “boyled” dishes (foods served in their cooking broths, sometimes verging on stews). But this section also covers many banqueting conceits, including fresh cheese, "banqueting dish" (fresh cheese made with curdled eggs rather than true cheese curds), candies (Manus Christie and sugar paste from which to fashion banquet tableware), fruit and flower confectionery (orange comfits and violet cakes), gingerbreads, biskets, rich little cakes, and "leaches" (sliced or sliceable dishes) of cream, dates, and sugar paste.

"Cookery" also contains several recipes for sweetened dairy dishes, later called "creams," including clotted cream, snow cream, and cut cream. In the sixteenth century, sweet dairy dishes were served exclusively in the principal courses of the meal, but they had become, in addition, banqueting conceits by the mid-seventeenth century. Precisely how early this transition began is an open question. There is tantalizing evidence of creams at a banquet supposedly staged in 1606 in honor of James I. Unfortunately, this evidence is tenuous, and Henry Frederick's book does not help to resolve this question, as its creams are outlined in a chapter that contains both dining and banqueting recipes.

Manuscript cookbooks compiled during the reign of James I (1603-1625) are rare, especially cookbooks of this length, breadth, and quality. The manuscript is somewhat difficult to read, both because it is written in secretary hand and because the ink is faint.